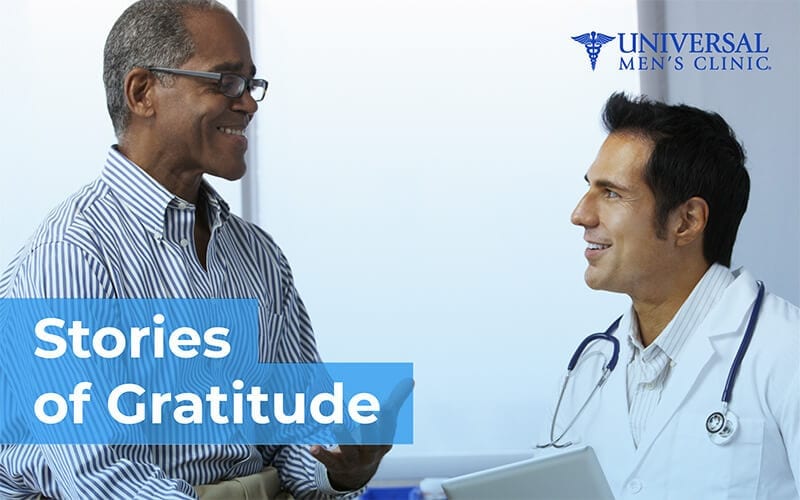 This holiday season we express our gratitude to our patients.  We appreciate the opportunity to be a part of your lives and would like to share how much you mean to us.

Over the next few weeks, our providers will share stories of their most gratifying moments of working with the patients of Revibe Men’s Health in the series – “Season of Gratitude”.

One of my most gratifying cases, till this day, seems to be too good to be true. My patient was diagnosed with an autoimmune disease and told he had about a year to live. Undeterred, he came into Revibe Men’s Health and after I assessed his medical condition, he started a treatment program. Within 6 months of therapy he gained muscle mass, which allowed him a better quality of life. He continued treatment and improving. Soon he was able to return to work and began reversing the muscle deterioration which had been happening for years. By the 12-month mark his autoimmune diagnosis was reported as misdiagnosed and his bleak prognosis of a short lifespan determined an error. He was still frail for his age, but showed signs of great improvement. During the years I worked with him, his condition and quality of life steadily improved.

Helping someone who was “on the brink of death” improve their quality of life was a gratifying experience. I’m humbled to have the opportunity to make such a difference in someone’s life.

Being a medical provider at Revibe Men’s Health allows me the pleasure of helping men achieve a better quality of life with our treatments. I find this especially true with patients on testosterone replacement therapy.

One of my most gratifying experiences was with a patient seeking testosterone replacement therapy. Although he reported the classic symptoms of Low Testosterone, his main goal was to seek help with his migraine headaches. Due to the severity and length – often days – of his migraines, he had been unable to hold a job and had been unemployed for some time. He was seeing a neurologist who had been unable to offer adequate relief and agreed that he could see us to explore hormone replacement. After explaining that testosterone replacement is not a treatment for migraines and that I could not promise relief for headaches, he decided to move forward with treatment anyway. He had nothing to lose. About a year later I saw him for a follow up appointment. I did not recognize him. He was glowing with health; told me he had not had a headache in almost a year and he was now working full time. His neurologist was surprised but pleased with his results.

It is these follow-up visits that are the most gratifying part of my job. For many patients, it was difficult for them to ask for help. But once they realize it is acceptable and that it could help them live more fulfilling lives, they couldn’t be happier. Seeing their joy and knowing that I played a small role, I feel immensely pleased.

Being able to make a difference by improving a man’s quality of life and relationship is especially rewarding.

A couple of years ago, a very nice, but distraught gentleman came into the clinic. His wife was threatening to leave him because he couldn’t perform in the bedroom. Not only did this pressure not help, but because of his lack of “activity in the bedroom,” she was convinced he didn’t find her attractive anymore or he had a girlfriend on the side.

After talking to him and reviewing his medical condition, I started him on customized ED and testosterone replacement therapy programs. At his two-month checkup, he seemed like a new man. His energy levels had improved, he was getting more work accomplished during the day – and getting more accomplished at night. He said that the treatment had renewed passion in his marriage. The patient’s wife had also come with him. She was so grateful to the entire staff. She stated, “Thank you all for giving me my husband back.”

These are the rewarding moments that make it worthwhile.

Over the course of providing medical care to the men of Tulsa, there are multiple instances that have caused me to reflect and be grateful for my role in not only the medical treatment that we are able to provide but the real world day-to-day improvements that we bring to multiple areas of our patients’ lives.

One particular patient’s improvement and success is memorable and gratifying. When I first met my patient, he had many symptoms typical to low testosterone. In addition, he was managing an overwhelming amount of stress from work and home. His work was physically demanding, leaving him drained and feeling that he would soon be reprimanded by his boss. By the time he got home, he was so physically spent that he could not muster up the willingness to interact with his spouse or children. Over time, this caused resentment from all parties.

After assessing his medical condition, I recommended a treatment program. His improvement was gradual, but impressive. His relationships improved to the point that his spouse came with him to his six-month follow-up visit. She wanted to express her gratitude for the quality care he was receiving. She shared that when watching her family, she became overwhelmed with emotion when she saw him being the one to continually start a game or rough housing with their children.

For me, this kind of response is what it’s all about and reminds me of the great privilege and responsibility I am so grateful to have.

Thinking back through my time at Revibe Men’s Health, there have been numerous patient experiences that were very gratifying in nature. One particular situation stands out in my mind.

My patient came in with his wife, I remember they were full of mixed emotions. They were very caring and kind to each other however, there was a palpable layer of anger and frustration as well. After listening to them for awhile, I could tell that the patient and his wife loved each other fiercely, but the patient’s lack of libido, energy, stamina, and an overall decrease in quality of life was driving a wedge in their relationship.

The patient had attempted testosterone replacement therapy but stopped when they moved out of state. Upon further discussion, it became apparent that the patient needed a better understanding of what testosterone replacement therapy could do for his health and the importance of keeping his estrogen levels in balance with his testosterone. By the end of the visit, the couple had a better understanding of the treatment program and its benefits and was hopeful for the future. Fast forward to his 2-month follow-up visit. Again, the patient came in with his wife. This time I could immediately feel that the energy between them was much different. They were both all smiles and there was no longer any tension in the room. The patient noted an overall improvement since starting TRT with us. This included a noticeable improvement in libido, energy, strength, and stamina.

Being there in that moment with both the patient and his wife, and seeing the passion return for the couple was truly a gratifying and memorable experience.

When I think back over my time at Revibe Men’s Health, the most gratifying patient experience was with a patient, who was unfortunately with us for only a short season before passing. What was special about this situation was not only that we were able to improve the quality of his life, but also the appreciation he and his wife had for those precious moments.

When he initially came into the clinic, I reviewed his medical condition and recommended a testosterone replacement therapy program. Not only did he experience many benefits from the treatment program, but his wife also was very happy with the results and care we provided him.

After his passing, she sent a hand-written note thanking us for giving him “so much of his life back.” She noted his increased energy and happiness and “…finally enjoying life again.” She also mentioned there was much improved intimacy between them, both physically and emotionally. She was sad to not have more time with him and thanked us saying “what you are doing for men and couples is priceless.” They are a treasured reminder to me and my team that we are not only improving the lives of the men we treat, but also their loved ones.

One of my most memorable and gratifying patient success stories began when I first started working at Revibe Men’s Health about 10 years ago.

My patient was a macho-looking man who worked as a CIA agent. He walked in looking very somber, distraught and worried. He was depressed, not interested in life and somewhat suicidal. After speaking at length with him, I discovered that he had just gotten divorced and felt he wasn’t able to emotionally recover from it. I put him on a treatment program to help him with his Erectile Dysfunction and depression.

Three months later, he walked into the room a completely different man. He was confident and jubilant, an overall very happy soul. He said to me, “I wish you had been here two years ago, I might have been able to save my marriage.”

I was pleased to have helped him become happy and full of life and I continue to work with him till today.

I find it particularly rewarding when I’m able to help couples strengthen their relationship.  About a year ago, a couple, who were married for three months, came into the clinic.  They had both anticipated intimacy being a big part of their new life together. But, since their nuptials, they had been unable to consummate the marriage causing great stress and anxiety. His inability to perform put a huge strain on both of them. Fortunately, we were able to find a customized treatment solution that rekindled the flame. They are now happier than ever. Needless to say, I’m thrilled at the outcome and pleased we were able to help them.